Some people tweet a lot. I follow a good deal of them. Sometimes excessive tweeting can include plenty of wisdom. Often times, however, it is just annoying. Chances are that if you follow somebody, you do care what they have to say, at least to some extent. If they tweet too much though, you may find yourself caring less, and you may even decide to unfollow them. Do you unfollow people who tweet too much?

Excessive tweeting is at the root of more than one of Twitter’s problems.

Twitter has been known to have trouble with user retention. People sign up and abandon their accounts. A common complaint about Twitter is that it contains too much “noise.” In other words, there are too many random tweets that nobody cares about.

I’ve always found it a bit naive to assume that just because you find a tweet useless,  it is useless to everybody. I’ve long considered that you control who you follow, so if you don’t like somebody’s tweeting, you have the power to stop following them.

This is still true, but perhaps it is more complex than that. I may want to follow @soandso (I’m only using this as an example) because I know that they will say things that I need to know sometimes, but @soandso may also flood my Twitter stream with useless conversation that I have no interest in – noise.

If that noise gets to become to much of an issue, I will likely end up deciding to unfolllow @soandso anyway, and try to obtain the info from somewhere else – somewhere that is less annoying.

The lesson here (from the business perspective) is that if you want to keep followers, you should probably limit your tweeting. That’s not to say that every Tweet has to be incredibly important. Just think before you Tweet, and keep your audience in mind. 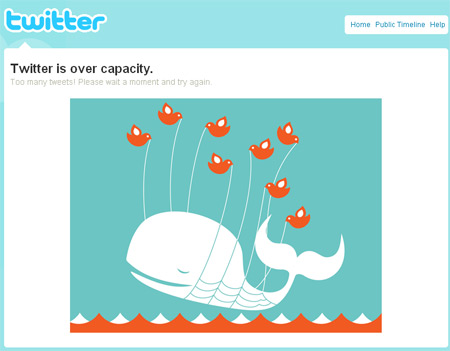 By tweeting too frequently, you may actually be hurting Twitter’s accessibility. Interestingly enough, while I was researching this article, I encountered the “Twitter is over capacity” error message a couple times (one with and one without the Fail Whale), which if you’ll notice in the illustrations below, is accompanied by “Too many Tweets! Please wait a moment and try again.”

If Twitter’s not operating properly, it’s not going to do anybody any good until it comes back. If you’re tweeting too much, you’re contributing to the problem. Twitter does limit the number of tweets you post in a day.

“We do cap the number of updates a user can make in a 24 hour period, whether via the API or any other input method (web, mobile, etc.),” said Alex Payne, Twitter’s API Lead in a Google Groups conversation back in January. “Right now, that number is 1000, but it’s subject to change at any time. ”

I am awaiting confirmation on whether or not this is still the number, but whether it has changed or not, Twitter may reduce it more still, considering the capacity issue. If Twitter wants to keep growing, this has to be a turn off (despite all of the charm of the Fail Whale).

I thought it would be interesting to see how frequently the people who actually run Twitter tweet themselves. As far as I can tell, the frequency isn’t too high. They tweet often, but not excessively. I browsed the last month or so worth of tweets from the following list of Twitter staffers (hat tip to Twittercism who has a huge list of Twitterers), and they all pretty much kept it to 20 tweets a day or less (5 or less or 3 or less in some cases, most were under 10).

I have to wonder if Twitter employees have a limit in place for themselves. Of course they know what happens when there are too many tweets. No point in creating more work for yourself.

Depending on what your goals are for using Twitter, I would say that it is possible to tweet too little. If you are using it for business purposes, then a lack of updates could reflect poorly on your effort to stay in touch with your followers.

As long as you’re not completely dead on Twitter for months at a time, you’ll probably be ok though. In fact, I don’t consider myself a very frequent tweeter. There is just as much (if not more) to gain from Twitter by absorbing the content that is coming in, than there is by pushing content out.

The Moral of the Story

Your Twitter frequency should be dictated by you goals. That said, you do not want to overdo it. You may lose followers from a lack of updating, but I would think you would be more likely to lose them when you update too much. Use moderation. Use other channels of communication when applicable. Use direct messages for one on one conversation.